Tropical Deciduous Forests: a pure nature’s gift. There are various biomes, scattered all over the Earth. Each has its own climate zone, endemic species and their influence are hard to underestimate. One of the most attractive biomes is tropical deciduous forests. What differs them from other biomes? Why are they vital? Which role do they play in the tourism sphere for each specific country, lucky enough to have them? Let’s find out!

Sometimes it can be hard to understand the difference between various nature biomes. The tropical deciduous forests are not an exception. In short – it is a tropical woodland, where seasons of dryness and rainfall rotate in a constant manner. They are also known as “monsoon forests”. These forests are located in the equatorial, subequatorial, and tropical regions. The climate of these regions is humid. Regular humidity is around 80-90% during the year. Their biodiversity is one of the highest among other biomes.

Moist deciduous forests have a high degree of humidity and moderate temperature. Their territory is covered with a balanced mingle of medium-sized leguminous species and grass, which can be used for grazing. The regular amount of rainfall here is around 100-200 cm per year.

The dry deciduous forests have a tendency of low humidity (around 70 – 100 cm per year) and high temperatures. The thorn forests are present in the most dried areas. They are a special type of forest, where small, thorny plants are forming a savanna woodland.

Both types of forests have a decent number of endemic plants and animals. “Endemic” means that these species are native to this exact region and their borders of habitation are restricted.

The most important thing is how these tropical deciduous forests function. The main difference, which is a key to their survival, is seasonality. In some cases, there is no rain for around seven months. How can a tree survive that? They shed their leaves.

During extremely dry winters, their need for storing the water becomes absolute.  To avoid transpiring it into the air, they get rid of their leaves. This defensive mechanism allows them to sustain long enough until the beginning of wet summers. During the dry seasons, they can also use the groundwater to sustain themselves. And when the rain season comes – they grow the leaves again.

These forests are spread throughout the global map:

Forests were developed in a succession – a process when one plant is effectively replaced by another. Ferns eventually evolved into tree-like plants. Around 140+ million years ago, a climate was humid and warm, and the plants eventually adopted a more dry climate. Around 1 million years (presumably when the Ice Age began) most of these plants and trees perished.

These environmental changes allowed new types of plants to adapt and cover the icy earth. Most of them, like pine and birch, were pioneer sun-loving and tall trees, which created lots of shadows. This fact alone changed the environment drastically. Meadow plants, which required lots of sunlight, were now hidden in the shadows.

It leads to the appearance of new plants, like red oaks, sugar maple, or beech, which prefer darker environments and do not require much sunlight.

Eventually, a mix of trees that love either sunlight or shadow appeared on the same territory and formed unique forests.

Even if the forest is destroyed for any reason, it may regrow itself in time. The two helping factors are seeds and animals. The seeds are spread by the wind from various adjacent regions. Animals are constantly changing their location. Both these nuances allow new seeds to sprout and in time it will restore. In the temperate or tropical climate, the chances for such restoration are quite high. However, such factors as human activity or constant wildfires could delay this process.

The Flora Of Tropical Deciduous Forests 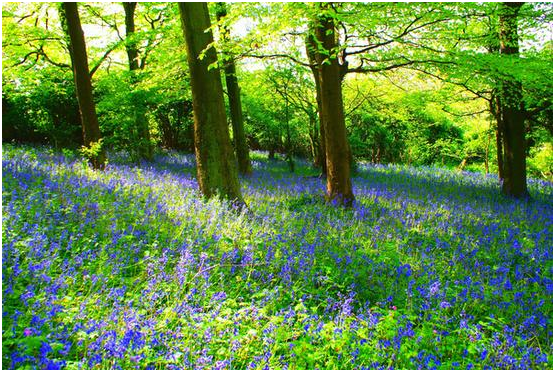 The popular types of trees in tropical deciduous forests are usually Oak, Teak, Beech, Maple, and Ebony. Also, there are such types as Hurra, Semul, Shisham, Mahua, Sal, Amla, and Sandalwood.

Free from the leaves, the forest canopy allows the sun rays to reach the lower layer of the forest. It provides a way to grow a dense bush undergrowth. Nonetheless, these forests are not as dense as, for example, the evergreen forests of Amazon and Orinoco basins in South America.

Each tree or plants form special layers in the forest. They are called crowns, understory, and the lowest layer. The crown is the highest layer, a canopy of the highest trees. Understory contains short trees/plants which prefer shadow. The lowest layer consists of various plants (flowers, fungi, and lichens), living on top of the soil.

In addition to the trees, there are two types of plants, called annual and perennial plants. While annual plants live only one season, perennial plants may live for two years or more. Even if the perennial plants perish due to the climate specifics, they could grow anew when the conditions are met.

The Fauna Of Tropical Deciduous Forests 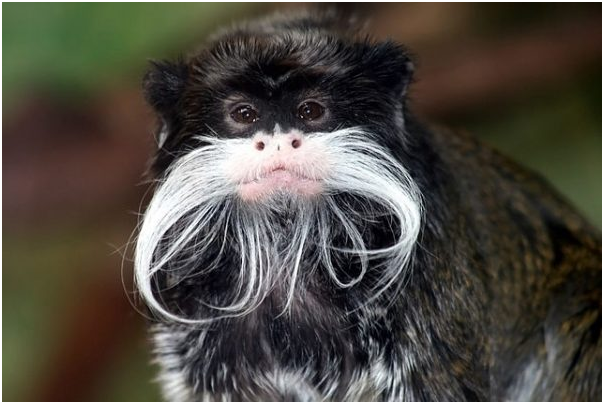 The tropical deciduous forest animals are highly adaptive to the harsh conditions of the local climate. Mostly these are monkeys, felines, parrots, and rodents.

For example, only in Madagascar, there are more than 14 unique lemur species. The rare Golden-crowned sifaka, Fat-tailed dwarf lemur, and several other endemic species are on the verge of extinction.

There is a region in South America, called Tumbesian. The number of unique endemic bird species here is one of the highest in the world – around 55. Despite its small protected area (1%), this tropical paradise remains the last refuge for most of them.

The Mexican region Sonora is famous for its rare, wild feline species, such as puma, jaguar, and ocelot. A lot of rare reptiles (like desert turtles, gila monster, and various desert snakes) inhabit these lands. This territory has one of the highest levels of dissertation and overall land degradation due to human activity.

As for India – there are presented such large species as lion, bear, deer, tiger, and elephant. The last two even have their own protection schemes. They were called Project Tiger, released in 1973 and later there was released a Project Elephant in 1992. The idea of both schemes was to protect the mentioned species from extinction.

If one would imagine appearing in a tropical deciduous forest – they would be amazed at how it’s even possible to survive long enough in such a place. Such forests are beautiful, don’t get me wrong. There can be up to 200-300 different types of both high and low trees and plants per square kilometer. Even though,  these forests are quite deadly for lone, unprepared visitors and not only because of the species which inhabit them. In the summer period, the temperature is high and stuffy. The dense plants create shadow, which isolates various plants and bushes from the sunlight. If one tree will fall – another will follow soon enough. Death and life are a never-ending cycle here. Corpses of trees and animals will be quickly digested by termites, bacteria, and fungus, which is not as bad as it may sound. The reason for this is that nutrients remain in the soil, effectively giving life and prolonging it for other plants.

The high tiers of the forest are mostly unseen even for a keen eye, and lots of animal cries create a cacophony of unending life. Overall, a great place to be in. If you have a good guide, of course. 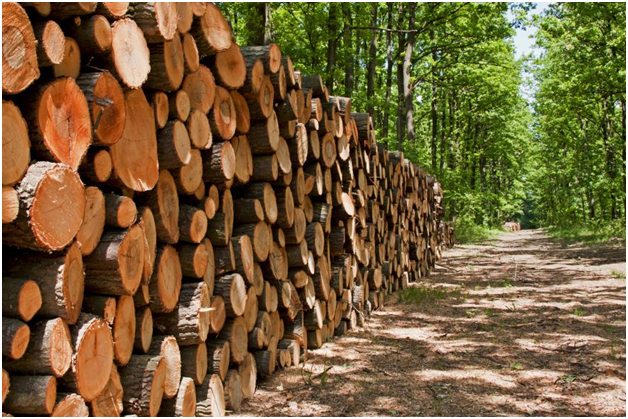 The commercial aspect plays an important role in why trees and plants from such forests are more valuable than similar trees in other areas. These forests are easier to be felled due to their medium density. The export of sandalwood trees, sal, and teak brings a lot of profit to the external market. These resources are usually used in building spheres, railway tracks, furniture.

The sad part is that these forests account for only 5% of all forests on our planet. Why the situation is so disappointing? There are a lot of reasons, but the main reasons are:

It has been noticed that selective logging made much less harmful for passive regeneration of the tropical deciduous forests. On the other hand, extensive logging or aggressive agriculture expansion may cause the revert effect. They won’t allow forests to restore for centuries.

Nature organizations should encourage people to assist in the restoration process of the forest. It can be achieved via timely fire management, control over logging scale in this area, and also protection from invasive pests.

Invasive species are separated into 3 categories:

Among the forest pests, the most infamous are Asian Longhorned Beetle, Gypsy Moth, and Emerald Ash Borer. They may lead to the loss of tree canopy and cause many other negative factors. All these nuances should be monitored and managed by the respective organizations.

Invasive plants can also be a serious problem for the tropical deciduous forest, as they affect forest productivity. They cause soil degradation and spoil groundwaters, which in turn impact the habitat of the wildlife. The well-known invasive plants include Knotweed, Medusa Head, Albizia, Garlic Mustard, etc.

Wildfire is usually a natural, uncontrolled disaster that destroys a large massive forest.  Sometimes it is caused by the human factor. Due to global warming and dry climate seasons, tropical deciduous forests are at a high risk of wildfires. They usually cause lots of harm to the flora and fauna of these forests.

One of the modern ways to oppose such a disaster is aggressive wildfire suppression, which appeared in the USA. Usually, they use an aerial firefighting aircraft to extinguish the flame areas asap. On the other hand, these operations have a specific risk involved. The accumulation of fuel may cause even larger, uncontrollable wildfires. High-intensity winds often cause unpredictable behavior of the wildfires. It makes the task of extinguishing wildfire even more complicated.

One of the main reasons for soil erosion and desertification at the cost of agricultural productivity. Organic fertilizers may help to mitigate the negative impact. However, in some cases, extensive grazing will cause the restoration process to stall for centuries. The reason for this is that soil exposure and extensive rainfalls cause a crust layer. It has a certain impermeability that leads to further erosion.

There are not many effective solutions on how to fix overgrazing, unfortunately. One of them is to plant warm or cool-season species on pastures while perennial species recover. Also, it’s possible to mix livestock feed with pasture forage to lessen the negative impact of overgrazing.

What can be done

Restoration of the tropical deciduous forests is not an easy task. It requires adaptive management and monitoring to control:

This site is supported by ads. Please help us out and disable your ad-blocker.